A Nostalgic Look-Back at the History of IT Staffing - echogravity
19136
post-template-default,single,single-post,postid-19136,single-format-standard,ajax_fade,page_not_loaded,,qode-child-theme-ver-1.0.0,qode-theme-ver-10.1.2,wpb-js-composer js-comp-ver-6.5.0,vc_responsive

A Nostalgic Look-Back at the History of IT Staffing Posted at 13:59h in IT Staffing by Kevin O'Brien

Remember back in the 80s, when a desk phone and Rolodex (sitting right next to the standard office ashtray!) were your best friend? 50 years later, it’s worth looking back across the decades to understand the history of the IT staffing field and project its trajectory as we move forward.

Incredibly, the business model has stayed relatively constant for the entire 50 years. Take a temporary worker, place them with a client for a contracted period of time, and make a margin on the per-hour rate. We’re in the business of simple economics. And we’ve been selling on that promise with no inventory (besides the occasional firm that carries a bench). In an industry of minimal barriers, a plethora of millionaires has been created.

Let’s look back through the decades of IT staffing. The 80s were a time where relationships ruled. Technology limited our capabilities to connect with people efficiently. With that clunky desk phone at hand, it was a game of timing. You hung on the thin hope that a hiring manager didn’t yet have a voicemail box and would pick up your call.

Ironically, without caller ID, you could typically expect that the phone was answered every time it rang. This was especially common in companies where shared phones hung on the wall of mainframe rooms, where operators and other employees spent many hours. (Of course, if you were a recruiter dialing into a company like this, suspicions ran amok. It quickly became common courtesy to ask, “are you in a place where you can talk right now?”)

Connecting to the right people often required evenings of investigative work. You’d call companies after 5pm (once the operator clocked out) and ran through extensions one by one to find the names of possible IT recruits or hiring managers. And that’s who you’d call the next day. A successful day for a sales rep would be returning to the office with a new Cobol/VSAM requirement or maybe a couple of AS/400 reqs. That was just the start of the fun, because the bigger challenge was not getting a new order but finding the candidates—and then convincing those salaried employees that a career as a contractor was more lucrative and thriving with opportunity.

The 80s were a time of running your business on mountains of file folders and frequent trips to the fax machine. At the end of the day, relationships are what made the difference. Lavish dinners, vacations, and an abundance of kickbacks helped solidify growth and success in the first era of IT staffing. 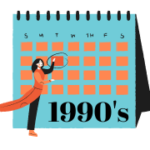 The 90s was our ramp-up to the age of the internet and the DOT COM explosion. Although technology was still slow and inefficient for business purposes, one specific innovation would change everything: electronic mail. As companies adopted email addresses for their employees, connections to IT staffing buyers and tech candidates became rapidly more accessible. From 1997 to 1999, internet usage increased tenfold! Despite the birth of the internet, newspaper job ads were the major temperature gauge of the IT employment market. If the Sunday job section was filled with ink, candidates would be stamping envelopes with resumes to go out Monday morning.

Of course, fax machines were still being filled with curly paper. The candidates getting interviews were those who faxed resumes that were customized to the specific position they were applying to. Thus, the resume became the most heavily weighted aspect in the interview selection process. As fax turned to email, technology ensured the beginning of human commoditization in the IT staffing industry.

On the sales side, roaming the halls was still a great opportunity to meet new people. Those with strong relationships helped acquire badges in big corporations for the sake of selling across company divisions. And for those sneaky sales reps, competitive intelligence was gained from sign-in sheets at the front desk of most corporations—just check the “What is the purpose for your visit” column for the answer “Candidate interview.” Then you knew who your competition was and where there could be additional job orders to go after. The 90s were a sneaky time.

As the 90s wound down, one major shift in the IT staffing field changed the relationship aspect of selling forever. The rise of Vendor Management Systems: friend or foe? VMS was a gamechanger. For the IT staffing firm that played along, it was a path to sales growth. As large corporations decided to consolidate and tightly manage the contingent labor process, outsourced functions became the deciding factor in which firms got the requestions and which didn’t. Purchasing control and tighter budgets put technology and process front and center, and many IT staffing vendors quickly chose to pursue companies that adopted these platforms.

For IT staffing agencies that were able to play the game and had the capacity to source high volumes of people very quickly, they often won the business, landed on the short list of preferred vendors, and boosted their sales revenue. For firms who were good at what they did but lacked the capacity for high-volume requirements, they unfortunately drew the short straw. The VMS movement forever changed the IT staffing business. The big downside to VMS was how much they cut into margins. After the DOT COM bubble burst and we headed into the new millennium, the term “mark-up” took center stage.

While IT staffing firms were losing jobs by the dozens, corporations focused on how they purchased technology talent. Increasingly, they demanded minimal margins as well as full transparency on pay rates versus bill rates, sending agencies into a fight-or-flight mentality. Many of these firms agreed to non-favorable terms in order to stay alive, which set the priority for new pricing structures moving forward.

These days, you’re more than familiar with how a single concept can overhaul an industry—think about how airlines now charge for every single bag you bring aboard. The staffing industry experienced a similar widespread change in the 2000s. It was a time of consolidation, whether it was vendor lists, technology systems integrations, or streamlined process. IT staffing firms faced major threats, and now was the time to figure it out or risk it all. For those who committed to figuring it out, there were serious shifts in the operational processes of both sales and recruiting. Staffing compensation models were challenged as margins became thin. Many account managers evolved from business development folks into project managers of large vendor programs. The required profile characteristics of these different types of IT staffing professionals shifted significantly.

The decade ended, of course, with the Great Recession of 2008 and 2009. Faced with universal hiring freezes and discouraging employment outlooks, even in IT, many staffing firms saw the end of their days. But for the ones that prevailed, the 2010s looked promising. The IT staffing industry saw recovery from the recession faster than anyone thought possible. The demand for IT talent reached levels no one ever expected. Although many technical positions were outsourced or moved off-shore during the prior 20 years, highly specialized positions, technologists, and project management skills were now highly sought after. The need to pull together disparate teams at a global level in an efficient manner was of utmost importance.

That said, with VMS and MSP systems gaining high adoption rates, small to midsized IT staffing firms needed a way to compete against national firms. Enter the Statement of Work (SOW) purchasing model. Until then, the IT staffing market was highly dependent upon the purchase of resources over deliverable-based solutions. Smaller IT staffing firms needed a way to enter large organizations in a way that eluded the controls of procurement and VMS. Strong relationships secured opportunities for these smaller firms to compete on projects by agreeing to a financial model without the risk of final deliverables.

The SOW is essentially a prepackaged set of resources on an hourly model, written up in a way where technology leaders could get the work done on their own terms without the organizational bureaucracy of procurement procedures. Mission critical projects needed highly skilled technology staff, and when procurement was the bottleneck against a complex landscape of supply and demand, technology leaders took matters into their own hands.

We chalk this up as a major win for the small guy! The resurgence of strong margins in a relationship-based selling model was good news. as larger firms looked to expand into new geographic locations or industry verticals. Firms that could showcase a legitimate and diversified book of business, non-dependent on owner relationships, happily sold and capitalized at a high growth time in the industry.

This was perfect timing to cash out—ahead of the altogether unexpected COVID-19 pandemic of 2020. It’s been a year for the history books, but where is the IT staffing industry headed as we move forward? The way we operate, and more importantly the way we sell IT staffing services, has been turned upside down. Adapting to the changes requires modification of sales processes, sales and marketing integration, brand recognition, and automation.

Because face-to-face meetings have been essentially eliminated for the time being, and opportunities have slowed, new business development has taken on a whole new meaning. And we have to set up our sales people for success accordingly.

We now have our buyers sitting in their homes with their cell phone and an integration of their workspace into their home life. How do we make connections to sell IT staffing services? That is the biggest question every single IT staffing client of ours is faced with today.

The answer is uncertain. But we do know that digital presence, brand recognition, and company culture are key ingredients to increase the probability of success. And it’s going to take some serious bridge-building between sales and marketing.

We are fortunate that during this pandemic, the need for technology has increased in so many ways. There is a great deal of pent-up demand, and it’s likely our market will see a resurgence like we’ve never seen before. Of course, even once things are once again business-as-usual, there will be a new normal. Of the habits we’ve created over the past months, many of them will stick for the long run. The work at home model is one of them. And it means that candidate demands will need to be accommodated and connections with prospective clients will remain difficult.

If you haven’t already done so, securing the foundation of your IT staffing brand is essential. People need their experience with your sales and recruiting teams to mirror the digital experience. Now more than ever, how you communicate your message and describe your organization can make or break the future of your business. Through the years, the buyer of IT staffing services has become less accessible—which means they have more control over how they buy your services. Their perception of your brand and company is key.

What do you plan to do differently over the next 10 years to adapt to the next era of IT staffing?

I’d love to chat with you more about this!

Give me a call or shoot me an email today.

Hiring Is Finally on the Rise but How Has COVID-19 Changed Staffing Sales?

Redefining Your Staffing Brand in a Post-Pandemic Staffing World