Posted at 09:29h in Brand Identity, Team Summit by echogravity

In his 2014 book, “Leaders Eat Last”, bestselling author and TED speaker Simon Sinek discussed what makes a business fail or flourish.  One of the concepts Sinek introduced was the Circle of Safety, a term that described how businesses succeed by creating an environment in which everyone trusts each other. In the Circle of Safety, people look out for each other, helping to protect those in the circle from the dangers outside the circle. There is also the understanding that success or failure are not credited to any one individual, but to the whole team. When the Circle of Safety encompasses the entire organization, employees can do their best work, freely exchanging ideas that push the business forward.

At echogravity, we’ve always believed in the importance of supporting our employees and we’re grateful for the growth the echogravity team has experienced over the past few years. However, we also recognize the challenges of building a thriving organization when our team is spread out across the country. That’s why, for the first time, we hosted an echogravity Team Summit in Chicago from June 4th to 6th. Using the Circle of Safety as our theme, echogravity employees gathered for two days of team building, workshops and fun in downtown Chicago. 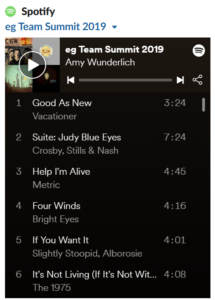 With team members arriving from across the country, some as far away as Florida and California, the summit kicked off with a casual happy hour and team dinner. Regrouping the next morning at Illinois State University’s alumni office, the eg team participated in an interview-style icebreaker to get to know each better. Team building continued over a catered lunch with a musical guessing game. Let’s just say, echogravity has a diverse range of musical tastes! Curious about what we listen to? You can find our echogravity playlist here. Lunch was followed by a surprise: an afternoon architectural tour on the Chicago River, where the team learned more about the history of Chicago and the many unique buildings lining Chicago’s riverfront. Following the boat tour, we grabbed a drink at London House’s rooftop bar, enjoying stunning views of the downtown and the warm, sunny weather. After a break brief back at the hotel, Team echogravity headed to Chicago’s West Loop for dinner. But instead of ordering off the menu, we played the chefs, preparing and cooking our own meal at Bespoke Cuisine. Under the guidance of experienced professional chefs, our team divided into groups, each tasked with preparing a specific part of the meal. One group focused on appetizers, a habanero mango salsa, guacamole, and shrimp arepas, while another group prepared an arugula and green apple salad and strawberry shortcake dessert. The final group cooked our main course: delicious steak and chicken fajitas. We discovered new ways to cut vegetables, picked up tips on grilling, tasting and plating, and in the end, came together to enjoy a wonderful meal. 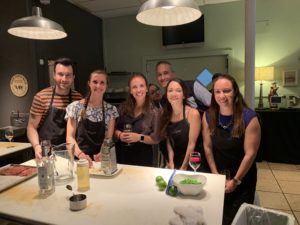 After a fun, but busy first day, we gathered again on Day 2 for more conversations around the purpose of echogravity and how to continue building our Circle of Safety. We were grateful to be joined by guest speaker Judi Wunderlich of the WunderLand Group, who spoke to the team about her years of experience in the staffing and recruiting industry, as well as the new technologies and social media tools she’s paying attention to.

After a long morning session and a catered lunch from Chicago favorite Portillo’s, complimented by another musical guessing game, the group spilt up for Team Breakout sessions. The breakouts allowed each eg team to focus on specific topics and areas of concern, as well as opportunities for growth and development. This time was especially beneficial, allowing teams to collaborate and share best practices around work processes, time management and creativity. Overall, the first echogravity Team Summit was a huge success. Our team left Chicago reenergized and excited about our mission, work and the future of echogravity.

Interested in working with echogravity? Discover how our team can help your business succeed! Contact us to learn more.